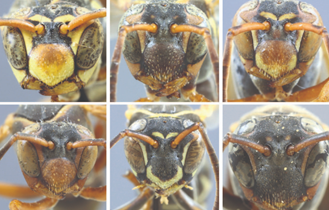 Stinging insects such as paper wasps, hornets, and yellowjackets are out in full throttle now that warmer weather has arrived. These pesky creatures may be a real pain, but they also serve some good. For example, the Northern Paper Wasp keeps in check devouring caterpillars that feast on our crops and trees. Read on to learn more about these fascinating insects and the allergic reactions they and other pests can cause.

The Northern Paper Wasp is likely the only wasp with the newly evolved skill of facial recognition. They can have multiple queens in a colony, and there is a hierarchy among them. The queens and the others in the colony know which one can reproduce the most, then who’s second in line, then third, etc. Their ability to cooperate as a colony with multiple queens allows northern paper wasps to continue expanding their territory north as the climate changes and warms. Northern Paper Wasps determine who’s in charge and who’s up next by fighting. Queens and other females remember who’s who and who is tougher by recognizing other’s facial markings and patterns, so they don’t have to fight again. Now, that’s harsh living arrangements!

Wasp” is the generic term for “Paper Wasp.”

There are over 300 types of paper wasps throughout the world, including yellowjackets and hornets, which are also a type of wasp.

Wasps, yellowjackets, and hornets vary in size and markings.

Yellowjacket nests are either deep underground or they hang from trees or under building eves and are spherical in shape. No matter its location, their nest is comprised of intricate cells of paper, and they can house thousands of yellowjackets.

Hornets tend to build their nests in hollowed portions of trees or in open areas such as an attic.

It’s best to leave a tree-dwelling nest that is tucked away from people alone. For those instances that pose a risk, call Northern Pest for safe removal.

Insects of all types can cause an allergic reaction. Most people who endure a bite, a sting, or breathe in toxic by-products suffer mild symptoms, while others may go into severe anaphylaxis. Common “normal” reactions include symptoms of slight pain, redness, itching, and minor swelling. Individuals who encounter dust mites or cockroaches endure a different type of reaction. Often confused as a cold, common symptoms consist of sneezing, coughing, runny or stuffy nose, and itchy eyes, nose, mouth or throat – it may even trigger an asthma attack.

Severe reactions can be life-threatening and require immediate medical attention ASAP! Symptoms usually involve multiple parts of the body, such as the skin, mouth, lungs, heart, stomach, and intestinal tract. Anaphylaxis symptoms include:

Click here to learn more about the symptoms of anaphylaxis. When in doubt, call 911 for any medical emergencies.

Northern Pest can handle any issue regarding Northern Paper Wasps and any other common stinging, biting, or otherwise nuisance insect. For inspection, call us today!